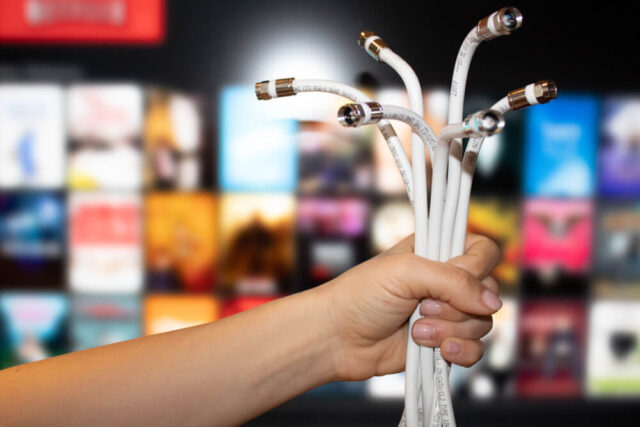 It’s becoming increasingly common for people to consider cutting the TV cord and ultimately getting rid of cable. Honestly, it’s an appealing option, especially considering how pricey pay TV is gradually becoming. Plus, there are a plethora of enticing streaming services options in the market that not only offer great content, but are affordable as well.

it is not simple for everyone to let go of their satellite or cable TV package. The decision is more complicated than it seems. Let’s first understand the situation around cord-cutting.

The average pay-TV monthly bill sums up to almost $110, and these prices seem to be increasing with every passing year. According to the Wall Street analyst firm, MoffettNathanson. these rises in prices drove 6 million subscribers away from pay TV in the last one year.

Streaming services such as Netflix and Amazon Prime Video are continuously creating new and interesting content, and have a lower subscription fee than pay TV.

While cord-cutting has become increasingly popular, there are high chances that might not have cut ties with your TV provider. We understand your dilemma. You are probably hesitant because the same company provides you with internet connection and phone service as well, making pricing a complication.

There are several other reasons why cord-cutting might not be for you. Here are some things you need to know before making a decision to cut your TV cord.

Cord-Cutters May Have To Pay More for Internet

Bundles are the perhaps one of the biggest reasons that keeps people stuck to cable TV packages. Apart from the convenience of receiving just one bill for your internet, TV and landline services, you usually get the internet service at a discounted rate.

This mostly happens when the internet is a part of your pay-TV package. If you were to de-bundle internet services from TV, you’re more than likely to find yourself paying more for the exact same level of internet speeds.

Another thing to take into consideration before going ahead and cancelling cable is if you’re presently paying for a lower internet speed, you may have to upgrade to a faster internet service if you’ve made your mind to choose an all-streaming route.

Especially, with most of us studying and working from home in this ongoing coronavirus pandemic, if you’ll be streaming 4K videos more, you ought to be ready to pay for a higher speed internet service.

When cable TV was initially launched, the biggest drawback was the lack of local broadcast channels. That situation has improved immensely over the last couple of years, which is why cable TV is still somewhat popular in American households.

When you compare this situation with streaming services, you’ll see a vast difference because despite the fact that many streaming services have tried including a number of local stations, there’s still a large gap for consumers who don’t reside in major markets.

The best way to know which local channels are available in your area is to head to cable TV provider’s websites and enter in your ZIP code and you’ll be able to see their complete channel lineup.

Most of us can wait a day or two for a favorite TV show episode to be on the internet if we don’t have cable TV, but you’ll miss out on sporting shows and live events. If you’re someone who loves local channels and shows, Spectrum Gold Package offers you more than 200 of such channels, and that too HD quality!

Cable May Just Be More Reliable Than Streaming

Believe it or not, one of the major aspects about cable TV is that it provides you with consistent, reliable signals and you can always expect to see a picture whenever you turn the TV on.

Also, since streaming services video quality depends on your internet bandwidth that can vary according to how many people in your neighborhood are on the same connection as the one in your house.

You may get a perfect picture late at night and early morning but that won’t be the case if you were to stream a show after dinner, as more people are bound to be doing the same around that time.

Consider the Number of Users at Home

If you’ve a busy home, with people trying to stream shows on their own laptop or TVs, you might run into some issues. Almost every streaming service has limitations on the number of people who can stream it at the same time.

And since streaming services run on the internet, you may not enjoy it if there are people in your house working or studying at the same time because it is going to impact your speed and cause lagging.

Although streaming services are trying to become a one stop solution, there’s no guarantee that a single service will end up offering all the channels you and your family might want to watch.

It ultimately depends on you and your family needs, and we hope this read will help you decide if cord-cutting is what you really need.