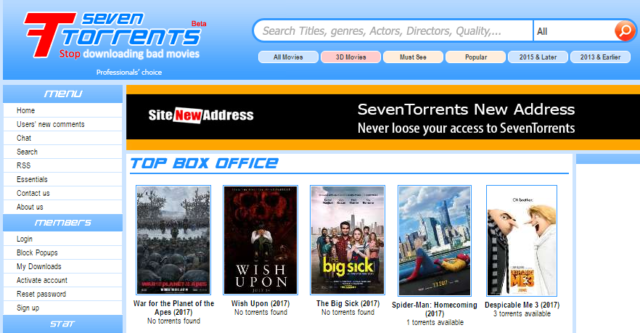 Torrent world regularly witnesses the website disappearance due to legal jeopardies. Users are therefore looking for alternatives to download the latest stuff like movies, games and songs! However, several torrent sites permanently shut down while many switch to data transfers. SevenTorrents is also in the news for a sudden shutdown!

Reportedly, SevenTorrents retired from the Torrent world, and it is a big name for those who regularly engage themselves with pirated stuff. Several renowned torrent holders like YTS, The Pirate Bay, KAT and SevenTorrent are serving users with desirable stuff from past many years. And SevenTorrents is ruling the industry for more than 10 years and owns a visitor base of more than 5 million, which is a significant number!

A recent statement published by the official account of SevenTorrents stated that “Today we have decided to retire. But this is not the end for you and we will not let you down, there is a good news for you,” and the news continued!

SevenTorrents Retired but not Dead!

Looking at the huge fan base, owners of SevenTorrents came up with a decision of transferring their database to WatchSoMuch, a close friend site of them. Plus point is it is a relatively newer site, and hence, it is about to stay for a while. Till then, who knows SevenTorrents might come up with a better version of them? Similarly, those users having a registered account on SevenTorrents can also transfer to the supporting site. This ensures hassle-free entertainment for all their existing visitors.

Another statement from SevenTorrents stated that “WSM owners are friends of us and very professional, they can be the no #1 movie site in next months because of what they are offering,” in a chat with TorrentFreak. But, anyways the old users of this portal would take some time to develop confidence in the new player.

Most important question amongst the minds of users is why the SevenTorrents is getting a retirement! And the reports revealed that there is no specific reason for the same. Website developers are facing common technical issues like the other site operators about copyright complaints, domain bans and warnings.

Although the WSM is a competitive torrent player in the market, regular users of SevenTorrents are going to miss it for sure!