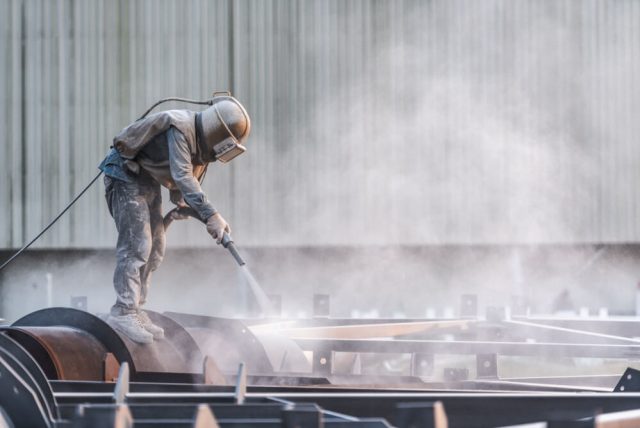 Sandblasting is a surface finishing process that involves the use of a powered machine also known as abrasive blasting. Typically a handheld sandblaster is used for sandblasting any surface. It is called as sandblasting because it blasts the surface with particles of sand. As the sand particles strike the surface, it creates more smooth and more even texture.

In this article, you will learn more about the cleaning with the best sandblaster and what the sandblasting is and its performed. Let’s check out the complete overview of it then.

Sandblasting is the act of propelling very fine particles of an abrasive material at a very high velocity towards a surface in order to clean or etch it. Sandblasting is popularly used as a way to clean the surface before starting a painting and cleaning rust from metal. But it has many other uses as well.

Basically, the sandblasting knocks and lose any paint, debris, and coating. So, you can wash and clean the surface easily. It simply results in an extremely smooth surface. For instance, the sandblasting setup usually consists of three components.

The sand was once the most commonly used material in this. However, now many other components have taken the place of the sand. These components are:

Apart from the components, there are two different methods to do sandblasting. These methods are:

Also, you must keep in mind to use the proper safety gear while sandblasting. Also, you must choose the best sandblaster for you if you want to have the best results. Because the abrasive particles could also hit the eyes and skin. And if you inhale them mistakenly then it can even cause you silicosis. Therefore, it is better for you to have proper safety. That’s why having the best sandblaster gun will be a good decision to help you with your work.

As we have seen a sandblaster is the common name of the machine itself. These abrasive cabinets are also popularly known as the beads, media and sand shot blaster. But these names really referred to as the media that is used inside the cabinet for blasting and not the name for the machine itself.

Although people often use sand while sandblasting. I will recommend you not to use sand it is a cheap way of blasting. Blasting with sand has many health hazards associated. Therefore it is better to avoid it. One of the most common health hazards found associated with blasting and is Silicosis. It happens due to the sand which contains silica. Although, you can find the sand which as a label saying silica free on it. But still, we will recommend you not to use it.

There are many better alternatives that you can take into consideration such as glass beads, garnet, aluminum oxide, and many more are there which offers you a safe and sound blasting. The media is actually responsible for all the work. How much time it takes to do the work mostly depends on the media and air velocity and some other factors too. Therefore, with the best sandblaster, having proper media is also important for appropriate work.

The Final Thoughts On What Is Sandblasting?

That’s a little overview of what is sandblasting. I hope we are clear enough to make you understand what is sandblasting. Along with all the things which you should keep in your mind like the material used and the safety measures. This is all from our side. Now it is time for you to get the best sandblaster gun and do some cleaning stuff for yourself.